skip navigation
Welcome to the Official Home of Raptors FC

Rockford Raptors list of scheduled tournaments. Applications are now opened for most of these events

Click on Tournament link or Raptors logo for more information

The Rockford Raptors are scheduled to host the following tournaments and Showcases .

* All events are subject to change due to covid-19 regulations

College Showcase format with three games and no playoffs.

Application for the 2021 PURI CHAMPIONS CUP Powered by Puma, April 16th-18th Click on logo to Apply

15U-19U Will be College Showcase format with three games and no playoffs.

Proud to be Raptors FC

•More than 300 former Raptor Players have gone on to play at the College level.

•Currently More ODP Players than any other local Club

•TopDrawerSoccer.com has listed 2 Raptors FC players on the Top 100 players in the Country

•Entire Coaching staff is certified and licensed while more Raptors Coaches hold advanced diploma‘s and more Licensed "A" coaches than any other local club.

•Establishedin 1994 as one professional team in the former USISL (now called USL, a second divisionleague below MLS) with the help of Dr. Wedgbury and established Youth system shortly thereafter. Doing so with the sole purpose of creating quality soccer training opportunity for Rockford’s youth. Later was the backing for establishing ISC and Sportscore Two as The premier Soccer Facility in the Country.

•Annually provides more than $70,000 in scholarships and financial aid for players.

•ONLY Local Club that have participated in MRL (boys & Girls) since its inception.

•Established and continues to host one of the most successful and sought after tournaments in the Midwest and Country as The Puma Cup hosts more than 680 teams annually over 2 weekends in April.

•Established and hired a Full-time Professional Athletic Trainer. To continue to raise and set the bar for other Clubs to try and copy but not duplicate. The ONLY local Club to do so.

Raptors FC Offers Three Levels of Programs - Which is Best for Your Child?

Please see below for the Raptors FC outline of programs available for yor child.  Contact us with any questions you may have.

Register NOW to be able to start training and playing Intra-scrimmages.

The Rockford Raptors are happy to report that we will return to Training on Monday, June 29th For the entire Club (2012-2001).  In order to be able to return to training we had to follow all guide lines and we have created a protocol that everyone needs to follow.  This Protocol is set to follow Phase 4.  We ask everyone to make sure to read our protocol and  make sure that your daugther and/or son follow this anytime that we have training and or games.

Details For Regions That Enter Phase 4 Of Restore Illinois

Illinois Youth Soccer Association (IYSA) is dedicated to protecting the health and safety of our soccer community. We understand that our member organizations want to get back on the field, but this must be done with strict focus on the safety of the players, coaches, referees and families and follow state and local guidelines for resumption of activities. The purpose of this document is to provide IYSA member soccer organizations and their athletes, parents, and coaches with information that they can use to assist them with developing their return-to-activity programming specific to their situation in context of the COVID-19 pandemic.

Illinois is currently in Restore Illinois Phase 3 with all of the state on track to reach Phase 4 on Friday, June 26. When a regon is designated Phase 4 by the state of Illinois, gatherings of fifty (50) or fewer people including full team training, games and tournaments are allowed as long as capacity and safety precautions are maintained.

This Protocol is based on Illinois Department of Public Health, US Soccer and US Youth Soccer guidelines for soccer organizations, clubs and teams that have reached the Restore Illinois Phase 4. The information in this document is NOT intended or implied to be a substitute for professional medical advice, diagnosis, or treatment. The knowledge and circumstances around COVID-19 are changing constantly and, as such, Illinois Youth Soccer Association makes no representation and assumes no responsibility for the completeness of this information. Further, your organization is expected to strictly comply with the Center for Disease Control (CDC), state and local guidelines for the resumption of play and seek advice from medical professionals and/or public health officials in your area if you have specific questions. These guidelines address only early phases of return-to-play and additional guidelines may, or may not, follow as the COVID-19 pandemic continues to evolve.

Although the young and healthy may be subject to less severe cases of COVID-19, every case of this disease is potentially life-altering or deadly, particularly in those with risk factors that may occur within our communities. Health consequences may be long-standing and only apparent weeks after initial infection and recovery. Until COVID-19 is either eradicated, a vaccine is developed, or a cure is found, there is no way of eliminating the risk of infection. This should always be at the forefront when designing and considering return-to-activity. 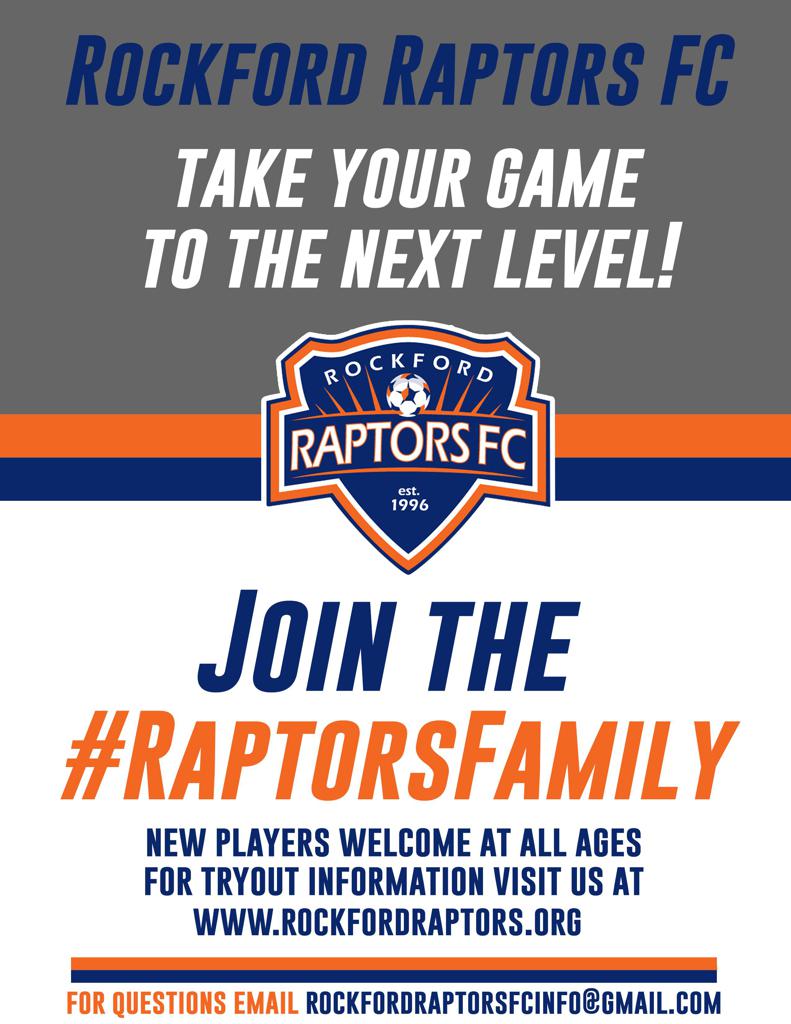 Due to the Covid-19 deadline for return to play we are currently working on new dates for club tryouts.

If you are new to the club and want to try out please fill out the attached form below. Once reviewed, a member of our staff will contact you with further information.

Raptors Return to Action Protocol - All Players, Parents and Coaches need to follow so that we can train

COMMUNICABLE DISEASE RELEASE OF LIABILITY AND ASSUMPTION OF RISK AGREEMENT

Message to all Rockford Raptors Families

With the Governors anticipated announcement later this week to move Illinois to Phase 3 of the state’s recovery plan on June 1, we'd like to inform you of the club's plans when we reach this stage.

Despite the opportunity to conduct training sessions with 10 or fewer people, we have decided not to return to the training fields until at least June 15th. Based on the protocols and guidelines set forth by US Soccer, the USYSA, and the IYSA (https://illinoisyouthsoccer.demosphere-secure.com/illinois-youth-soccer-return-to-activiy-protocol-updated-may-26), the feasibility of conducting these sessions pose many logistical and safety challenges that would be difficult to meet at this time.

Additionally, due to the State’s strict guidelines and protocols the Rockford Park District is required to adhere to for this reopening, Sportscore 2 will remain closed until further notice.

Every registered player will be required to complete the new “IYSA Communicable Disease Release of Liability and Assumption of Risk Agreement” before being allowed to return to any club activities. Please complete the attached form and email it to your team coach or manager to keep on file.

Until we can return to the field, we will continue to offer the current lineup of club-wide training with our live technical training on Monday and Wednesday, and Movement Fitness SAQ Training on Tuesday and Thursday. We will also be scheduling future webinars that will benefit our players on and off the field.

Due to the uncertainty of when we can return to the field we will not be holding in-person tryouts. All Raptors players registered with the club for 2019-2020 season will offered a "Club" roster spot for the 2020-2021 season.

Any new players wishing to be considered for the upcoming season should complete the New Player Tryout Formhttps://drive.google.com/open?id=14R-KPW4ArH6LchZ_-9ZkDS7e008MQbEsBxkN0BVnBQM

Once the coaching staff has had thorough time to evaluate the list of returning players, along with any new players wishing to join the club, actual "Team" rosters will be announced with the goal of placing each player at a training and competition level appropriate to support their continued development.

Details on how to register and accept your place in the club for 2020-2021 season will be available soon. Club fees will not be increased and will remain the same as 2019-20.

We’d like to again thank all of you for your patience and understanding as we continue to navigate our way through these unprecedented times. We’re all eager to get back on the pitch and resume training and games but the health and safety of all our players, parents, and coaches remains the top priority. We will keep you updated as new developments are announced. Please feel free to contact us with any additional questions or concerns.

During this difficult time it is even more important that we support our locally owned businesses.

Please see attached a list of  businesses that are owned by our Raptor families.

This list will be updated on a daily basis.  If you want to add your business to the list,  please email Hugh Ward at shuggy6@comcast.net.

Another Great Accomplishment on Raptors Class 2016 player. She just continues to make us all very proud of her and we can't wait to see what's next

Written by Calvin Wetzel from the "Her Hoop Stat"

There are 3,323 NCAA Division I women’s basketball players that qualify for the Her Hoop Stats minutes per game leaderboard this season. The collective group would only fit into half of the Ivy League arenas. But the number of those that have played another Division I sport? They would likely fit into your car.

As Kansas State head volleyball coach Suzie Fritz puts it, “That’s a very, very difficult endeavor that is probably limited to a handful of people.” Handful, indeed—the word is only fitting for a group that you can count on one hand. There are three of them, to be exact. Three ultra-talented athletes who are better at their second sport than most are at their first.

The multisport tie that binds aside, each one has a unique story.

Schmelzer is perhaps the only player on this list who runs less in basketball than in her other sport. “She’s probably the most conditioned athlete I’ve ever coached at any level,” said UW-Milwaukee head women’s basketball coach Kyle Rechlicz.

Schmelzer’s college decision is a quintessential story of coming full circle. After originally committing to play soccer for UW-Milwaukee during her sophomore year of high school, a change in the Panthers’ coaching staff led her to reopen her recruitment. Before long, Northern Illinois swooped in and Schmelzer was all set to become a Husky.

Then came the final months of McKaela’s high school basketball career. Around January of her senior season, she realized that she wasn’t ready to give up basketball just yet. Northern Illinois wasn’t keen on the two-sport idea, and thus began another period of open recruitment. When Rechlicz heard about Schmelzer’s decision, she didn’t hesitate. “I absolutely jumped on the opportunity,” Rechlicz said, “because she’s just such a competitor.”

Such a competitor, in fact, that breaks from workouts are more nuisance than respite. “You try to take her out of a drill because you want to manage her minutes, and she loves to give you a dirty look,” Fabiano said.

It’s a relentless work ethic that’s accompanied by humility and a drive to improve. During an attacking drill in a soccer practice last season, McKaela was losing the ball a bit too frequently. Fabiano quipped, “Wow, you’re a point guard in basketball?”

Schmelzer’s response? “Yeah, but did you see how many turnovers I have?”

“That’s the type of person she is; she doesn’t sell something she’s not,” Fabiano said. “She doesn’t throw her teammates under the bus … she just wants to get better.”

Schmelzer’s number one piece of advice for young athletes would be to have that same mindset: “Don’t ever let anybody tell you no.”

The one time when McKaela will tell you no is when you ask her if one of the sports is her favorite. “I don’t think I’ve ever given anybody an answer,” she said. “Whichever one I’m in I love, like with a passion.”

After redshirting her freshman year of basketball, Schmelzer will return next year for one more season before graduating with a degree in biomedical engineering. Her collegiate soccer career is over, but Fabiano sees potential for more soccer in her future. “If she wants to be, she could be a pro,” he said. “She has all the tools.”